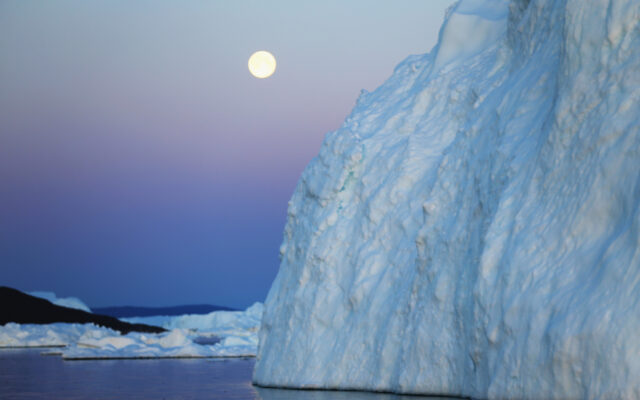 ILULISSAT, GREENLAND - JULY 23: A full moon is seen over an iceberg that broke off from the Jakobshavn Glacier on July 23, 2013 in Ilulissat, Greenland. As the sea levels around the globe rise, researchers affilitated with the National Science Foundation and other organizations are studying the phenomena of the melting glaciers and its long-term ramifications. The warmer temperatures that have had an effect on the glaciers in Greenland also have altered the ways in which the local populace farm, fish, hunt and even travel across land. In recent years, sea level rise in places such as Miami Beach has led to increased street flooding and prompted leaders such as New York City Mayor Michael Bloomberg to propose a $19.5 billion plan to boost the citys capacity to withstand future extreme weather events by, among other things, devising mechanisms to withstand flooding. (Photo by Joe Raedle/Getty Images)

While most Californians are cursing the series of storms that have been ravaging the state this week, at least one resident is thanking his lucky stars after he narrowly escaped getting crushed by a boulder.  Malibu resident Mauricio Henao says he climbed into his Toyota Prius earlier this week when his girlfriend called and asked him to get something from inside the house. A split second after Henao stepped out of the vehicle, a huge boulder — which had been dislodged from a mountainside by the storms — came crashing down on his car, crushing it.  “I just said wow, this could’ve been me inside this car,” Henao says. “I felt like goose bumps because if it wasn’t for that call, ‘Hey, can you check on my bag?,’ I probably wouldn’t be here.” He goes on to say the incident gave him a whole new appreciation for his girlfriend, who was still on the phone with him when the near-disaster occurred. “I said thank you for calling me because you saved my life,” Henao says.