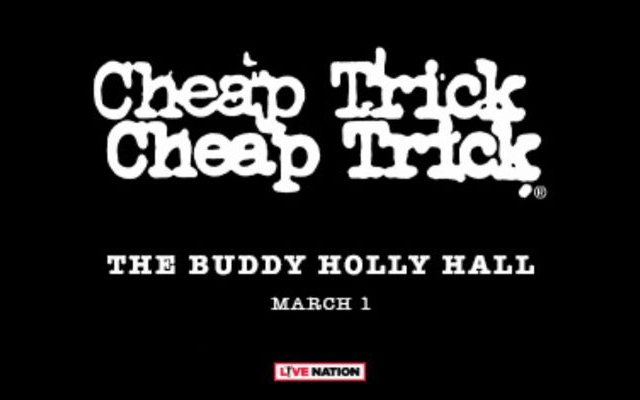 Lubbock, TX – Cheap Trick is an indisputable American institution, beloved around the globe since 1974 for the instantly identifiable, hugely influential, brand of pop rock ‘n’ roll. The legendary band will be making a stop at The Buddy Holly Hall of Performing Arts and Sciences on March 1, 2023, at 8 p.m.

The band includes Robin Zander (vocals, rhythm guitar), Rick Nielsen (lead guitar) Tom Petersson (bass guitar), and Daxx Nielson (drums) – are true pioneers with an unparalleled streak of certifiably classic tunes including California Man, Dream Police to Surrender and I Want You to Want Me among others.

Cheap Trick was inducted into the Rock and Roll Hall of Fame in 2016. The induction honored both the band and the pioneering sound that has earned them total record sales well in excess of 20 million, featured appearances and more that 40 international gold and platinum certifications.

In May of 2018, the band released its single, The Summer Looks Good on You. The song was the first glimpse at the Ban’s 20th studio album, IN ANOTHER WORLD, which debuted at #1 on the Billboard Rock Chart upon its release in Spring of 2021, their highest first week chart placement in their long remarkable career. After a year of cancellations due to the pandemic, Cheap Trick is now touring once again.